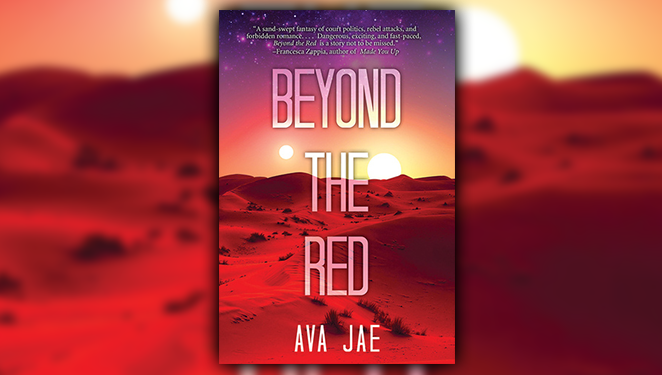 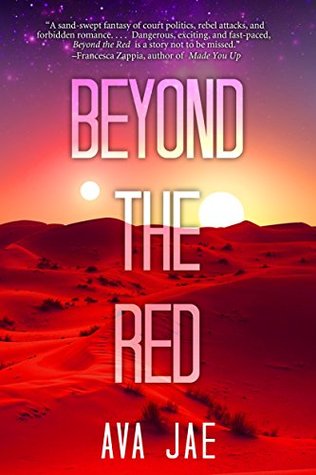 When it comes to the broad sibling genre of Sci-Fi and Fantasy, I’ve always been more in the favor of Fantasy. But Beyond The Red by Ava Jae showed me a whole new world within the Sci-Fi realm, and I have fallen in love.

Alien queen Kora has a problem as vast as the endless crimson deserts. She’s the first female ruler of her territory in generations, but her people are rioting and call for her violent younger twin brother to take the throne. Despite assassination attempts, a mounting uprising of nomadic human rebels, and pressure to find a mate to help her rule, she’s determined to protect her people from her brother’s would-be tyrannical rule.

Eros is a rebel soldier hated by aliens and human alike for being a half-blood. Yet that doesn’t stop him from defending his people, at least until Kora’s soldiers raze his camp and take him captive. He’s given an ultimatum: be an enslaved bodyguard to Kora, or be executed for his true identity—a secret kept even from him.

When Kora and Eros are framed for the attempted assassination of her betrothed, they flee. Their only chance of survival is to turn themselves in to the high court, where revealing Eros’s secret could mean a swift public execution. But when they uncover a violent plot to end the human insurgency, they must find a way to work together to prevent genocide.

I’ve been a long time follower of Ava Jae’s writing advice Writability (and you should be too!), and when I heard that their debut was coming, I was ecstatic. Surely, someone who gives such great and dependable writing advice should have written an amazing book, right? And Ava delivered, beyond all expectations.

Reading the book of someone who you hold in high regard due to their advice can feel like you’re walking on a fine line. On one hand, their book could not hold up to your expectations, and fall flat, thereby disillusioning you to their advice. It could be just plain bad and you’ll forever doubt any sort of advice they may try to give, because clearly their advice wasn’t good enough if they didn’t follow it. But, like in the case of Beyond the Red, it could be everything you could have ever hoped for and more.

I felt deeply connected to Ava’s characters, rooting for them from the start. Ava’s writing is rich and powerful, and their prose is almost lyrical when read. The book has a strong set of characters, all with their different agendas, and the story itself has the potential to become a classic and a staple in the sci-fi/fantasy community.

My one and only gripe comes from the sudden end of the book, which sets up for a sequel, and perhaps it comes from my deep need to know more and submerge myself in the world of Sefara. I want more world-building, more stories, a comprehensive guide to the Sephari language, a history of all things Sephari and how humans came to the world. I essentially want this to become as wide and detailed as Harry Potter or LoTR, where I can learn the language and read everything there ever is to read about this story.

New @bookedowlnight episode is up! We interviewed @dallaswoodburnauthor about her book THE BEST WEEK THAT NEVER HAPPENED!
May's #bujo spread! Still considering what my monthly doodle will be. March was leaves, April was clouds. Maybe lavenders, or some other kind of flower. Daisies? Tulips? × Monthly page and At-A-Glance. I like both the calendar view and the list view of the whole month! × Then there's my habits tracker. It's expanded with some extra health focused stuff, and I'm trying something new with combining the mood & sleep trackers together and adding a little notes section. You can tell I forgot to add the notes section until after I wrote the big TRACKERS title. 🙄 × Next is my writing habits and word count tracker. Some repeats from the habits tracker but I like to see how it all goes together in terms of my writing. I like the daily word count graph at the bottom left, since it's so fun to make bar graphs! × Then there's my fitness tracker, since I'm aiming to lose weight and feel better. There's the weight graph itself, and a step counter as well as a fitness lot next to it to jot down what fitness stuff I did. I'm aiming for at minimum 3 workouts a week. × Then a super simple expense tracker. Columns for date, place, type & amount spent. It's nice to see it all together × And finally, my weekly spread! The little boxes are used to keep track of how far into a book I am, there's going to be a running list of books I'm reading and then I've got to fill out all the daily bits like work hours, events, d&d games. It's basically what my bujo has been since quarantine started.
Not every day can be a good hair day, but I'm trying. At least I put on real people clothes today and not just the same holey shirt that has somehow survived every wash despite being several years old. But it's a rainy day and I want to be productive and I got myself a cold brew for the first time in weeks (and a donut to celebrate my partner almost finishing his semester. We're two days off. We're close enough for celebration.) Also actually finished setting up next month's bujo spread before the start of the month so expect pictures of that soon!
Happy Easter!! 🐰🐰
Missing my beans a lot today 😭 wish I had you two here with me
Morning walks are nice when you actually remember to get out of bed. ☺️