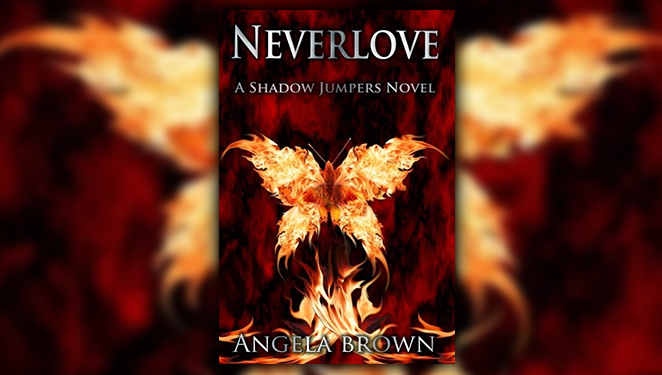 If there’s one thing that saddens me the most,

it’s a story that starts off strong—promising, full of emotion and a great hook—and turns sour too soon. Something that could have been fun, driven with intrigue and complexity but becomes so bad that it makes it virtually unreadable. That’s how I felt about Neverlove by Angela Brown.

Neverlove begins with our main character, Abigail, about to take her life because of her broken home. It turns out her father has been molesting her for years and she doesn’t have a way out. Within the first two pages, I found myself rooting for Abigail; I wanted good things to happen to her, I wanted her to have a happy ending right away, regardless of what obstacles her life threw at her. She tries to take her life, but fails because some strange things happen.

Then we see Basil, a young man in college with a rough life—a difficult home that’s not quite on the level of Abigail’s but still troubled. Basil accidentally signs a contract with the devil; which is where I should have realized things were not going to go in the right direction for this story. He signs a contract on a technicality; he jokingly says it and he’s bound to the devil.

When Abigail wakes up in the hospital, she gets taken to V’Salicus Academy, a place for suicide survivors, and evidently, a place of Holy Cleansers, where students are learning to travel to a mythical place called the Mists to bring lost souls to heaven before Harvestors, the devil’s servants, can bring the lost souls to hell to be devoured.

Suddenly, Abigail can use magic and she’s apparently one of the best, despite being new. She makes friends, but we never see those friendships bloom. She trains, but we never see her learn. The book glosses over so many crucial facts about Abigail and Basil, in turn. We barely know who they are; we don’t see them grow as people or as a couple as they meet and get together.

And when we do see Abigail and Basil together; it’s forced, and awkward to watch. Basil doesn’t learn about Abigail’s past through her own volition; she doesn’t tell him when she wants to. He finds her journal and reads it, and not only is it a violation of her privacy, but they end up together almost immediately.

I stopped caring about the characters and their relationships. Because it’s one thing to show us a dark backstory, or a broken home and make us worried for the character because they might take their own lives, but if we don’t see the characters grow or watch them build relationships, we won’t care if bad things happen to them or their friends. The emotions they go through, no matter how high-strung, will be pointless and feel forced to us as readers, because we never learned about them and we never were given the chance to see how they were together outside of the plot.

I found myself forcing myself to turn the page; I didn’t want to, but I wasn’t about to let myself post another DNF book review as I know it isn’t fair to the author or the book. It’s one thing if the writing and the story are so appallingly bad that I can’t finish the book. I was interested enough only to rationalize continuing, but not enough to care.

I have another Angela Brown book on my Kindle and I’m only hoping it’ll be better than Neverlove was. Neverlove is available for purchase as an ebook and a hard copy on Amazon, though I can’t in good conscious recommend that you do. But perhaps it’ll be your cup of tea. After all, folks liked Twilight and maybe some people like Neverlove too.

I received Neverlove for free from Netgalley.com in exchange for an honest review.