For me, there are two great things in the world: books and free stuff. And when the two come together, it’s like poor college-kid bookworm heaven. 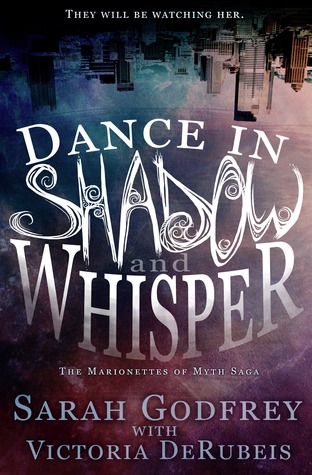 As an avid tumblr user and writing advice junkie, I follow my fair share of writing blogs and authors on tumblr (some are well known, like Neil Gaiman and John Green, others are folk in the publishing business and others still are just other aspiring authors with a knack to help others). Among the 250+ blogs I follow, are authors Sarah Godfrey and Victoria DeRubeis of Keyboard Smash Writers. Their blog is pretty nifty, but I’m here to talk about their book(s), not just their website (though you ought to check it out, it’s pretty damn great).

Back to free things! Sarah and Victoria, co-authors of The Marionettes of Myth series, wrote the first installment Dance In Shadow and Whisper, about a year ago and over Christmas/through the New Year, they offered a “buy one get the other free” type of deals and, having been meaning to check it out anyway, I figured it was the perfect chance, and I haven’t regretted it since.

A Basic Rundown of the Plot

Kali is a demon who lives in Pittsburgh, with her two brothers and her fathers. She’s been trained her whole life to take on any threat, but there’s one threat she’s never been trained to face: a human high school. Kali is given a mission to go to a humans only high school in the city in order to find and protect a human boy named Jason, who is thought to be more than he looks as well as a subject of an age-old legend. She and Yuuhi, a vampire sent by his own people to partner with Kali, face obstacles like gym class and murderous supernatural folk in order to keep Jason safe.

Kali, the ever obedient, is a well oiled machine and a strong person. Literally. She’s been around for hundreds of years and it shows; she calls cell phones “cellular telephones” and doesn’t know what a drag queen is. But she’s strong and clever and witty. Yuuhi, the ever brooding, is tall, cold, and mysterious. He’s got more walls than China and a shoulder colder than a Russian winter. Both of them are dynamic characters; neither of them remain the same as when the story starts. Both have drastic changes in personality, mindset and character and it’s one of the most dramatic and enthralling part of the book.

In regards to the tired vampire/demon/supernatural trope, Godfrey and DeRubeis subvert just about everything you could think of. Yes, the vampires still suck blood and they shy away from sunlight, but they’re truly undead and have more powers than just sparkling and circumstantial superpowers. The demons are rough and tough and animalistic; their bodies are so much denser than anything else that they’d sink like stones immediately in any body of water. We don’t see much outside of the vampires and demons, with the occasional mention of a shape-shifter, but when it comes to the creatures we do see, it’s a fresh twist on a classic.

It took me three months to get through this book. Of course, I was juggling the start of a new semester, three other books, and my own projects, but it still took me longer to get through it than it usually would. There were some parts that dragged and lulled, where the exposition was heavy and the plot stagnant. It’s obviously expected to be that way; not every part of a story can be high action and fast pace, there must be contrast. In certain parts, I almost felt like there were details in the wrong places and emphasis on things that didn’t make sense. Sometimes too many characters were introduced at once and wouldn’t be mentioned at all over the course of the next few chapters and wouldn’t even reappear until another few chapters after that.

As many good things do, the story started off with its feet on the ground and it was heading forward at a comfortable and fast enough pace. It sagged along the way to the middle, but it picked up and didn’t stop until it had to, and I kept searching for more.

Dance in Shadow and Whisper  was self-published by Sarah Godfrey and Victoria DeRubeis on June 19th, 2013. It is available as a Kindle e-book on Amazon and as a paperback from B&N. Read more about it on Goodreads.