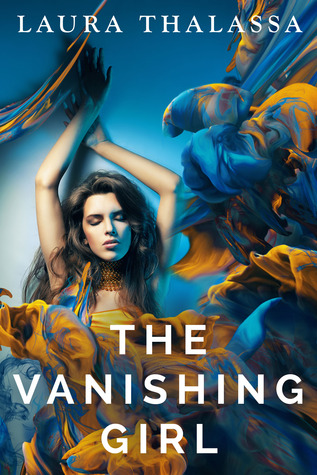 The Vanishing Girl by Laura Thalassa promised to be exciting and thrilling, with adventure and teleporting girls, but it ended up being creepy and disappointing.

Every night after Ember Pierce falls asleep, she disappears. She can teleport anywhere in the world—London, Paris, her crush’s bedroom—wherever her dreams lead her. Ten minutes is all she gets, and once time’s up, she returns to her bed. It’s a secret she’s successfully kept for the last five years. But now someone knows.

A week after her eighteenth birthday, when frustratingly handsome Caden Hawthorne captures her, delivers her to the government, and then disappears before her eyes, Ember realizes two things: One, she is not alone. And two, people like her—teleporters—are being used as weapons.

Dragged off to a remote facility where others like her live, Ember’s forced to pair up with her former captor, Caden, to learn how to survive inside until she can escape. Only Caden’s making escape seem less and less appealing.

But even as Ember falls for the boy who got her into this mess, she knows that she is running out of time. Because the government has plans for those like her, and those plans might just cost Ember her life.

I was so excited to read this, because I love teleportation antics. But antics was the furthest thing I got. Thalassa has some great command of language; I was curious, nervous and intrigued throughout most of the book. She knew how to twist a phrase and make the language really soar. The main character, Ember, is feisty and headstrong. She can fight her way out of anything and knows how to survive; she has a goal and she does everything she can to get there.

Then along came Caden.

Caden was the whole reason I wanted to drop this book and light it aflame. (Okay, metaphorically. I was reading on my Kindle.)

Caden is another teleporter, the first Ember meets when she’s recruited into the secret government agency that essentially creates these teleporting spies. Caden is, to put it lightly, a Grade A Creep.

Once he captures Ember after she escapes the government agents who came to collect her on her 18th birthday, he handcuffs her and invades her privacy. He gropes her inappropriately, goes through her things and shows off the underwear she packed in her escape backpack. When at the government facility, he makes an effort to force Ember to be naked in front of him, multiple times. Every time Caden came out, I was furious.

Then he and Ember fell in love, and she forgave his creepy advances and inappropriate actions almost immediately. I didn’t believe their love, not even if the story tells me they were literally made for each other, and the only way I’d ever want Ember in the same room as Caden is if she were going to court against him to get him incarcerated for sexual harassment.

In short, this creepy and abusive love story killed the entire book for me. Had Ember been on her own, even forced into partnership with the cliche bitchy girl who was her “love interest’s” ex, I would have been so much more thrilled with this book. If Ember had to come to terms with her ability and learn under someone who wasn’t as awful as Caden, I would have given this book five stars.

Sometimes, a love interest makes for a better character and a better story. But this time, it did nothing except make me want to throw up at every mention of Caden. Had Caden’s shitty behavior been punished instead of glorified and rewarded, I might have been okay with it.

New character, who dis? 😍😍 ° Of course while playing s vulture grave cleric, you gotta go with the pinkest dice possible! #dnd #dungeonsanddragons #humblewood
Day 6 of #authorlifemonth, Inspiration. × Whenever I write, whenever I sit down to imagine anything, I always come home to the motherland. My parents are from Poland, and all of my family lives there, save for two aunts. I've always felt torn between home being here or there, between the mountains my family calls home and the shore town we call home too. I've always felt lost between worlds, and maybe that's what drew me to fantasy in the first place. × Whenever I imagine a magical place, I imagine the space between the sosny, overlooking the farm that's been a part of our lives for years beyond years. I used to sit at the base of the trees and write or read on warm summer days. Those trees are gone now, but the view up there is the same, with the red roofed house and the old wood barn. × We used to walk up the path from my grandparents' house to my aunt's house, maybe a two minute walk, to get ready for bed. Some nights, we could see a thunderstorm over the distant hills and talk about god taking photos. I wish I took more photos. × There's so many mountains in Poland worth writing about and they'll always be my favorites. The Three Crowns and then Zakopane are always my favorites.
Day 5 of #authorlifemonth, Shelfies! × I've moved this year so my bookshelves have shrunk a lot recently. But here's my adorable puppy in front of my old shelf, with some faves facing out. × There's also my current shelf (and, at the time, the unfinished shelf belonging to my partner). It's gotten a lot messier since. Imagine a lot more d&d books and stuff crammed into every space and really, I need my old bookshelf back. × Like the beauty in pic number 3. Look at her. So full and big. I've learned I'll never be satisfied with a single set of shelves. I will absolutely need a room full of shelves to house all my books. And then a whole separate room full of MORE shelves for even more books. × I only have a minor problem with space and buying books that don't fit.
#authorlifemonth Day 4! • In terms of fans or mascots, I don't have many, but I've got important ones. As always, my Workshop Swap buds over at theworkshopswap.wordpress.com slack have been great at helping me stay on track and get feedback, as well as explore their wonderful ideas and worlds. I've got forever love for all the kids over there, but especially @athetland and @christamartini for their constant support. ❤️ • It wouldn't be a proper post of I didn't mention my nugget, Nala. I miss her so much every day, since she's 300 miles away, but she was always good for a cuddle and to cheer me up when I needed it. • And besides the TWS kids, my SNC pals will always have a place in my heart for their part in my journey. And especially the dinosaur that is @jmtuckerman. My forever friend. As dear old Anne and Diana would say, the greatest bosom friend I could ever hope for. Jessi has seen me through the messiest drafts and the worst days, but also on the good ones, with the triumphs and successes. She's one of my greatest fans, and I'll always be here biggest fan. I've already written fanfic for one of her manuscripts.
It's #authorlifemonth Day 3! My writing fuel is a (un)healthy mix of breakfast food, coffee and tea. I love me some great breakfast food. And coffee. And tea.
Nothing published yet, but I've got a lot of things in the works. Currently working on my bisexual ghost and her goth ex gf save the town from zombies YA. Been working on that for a few years, and it's changed a lot over the course of it's lifespan. • I write in many mediums. Often, digital. My fingers go faster than my brain in that situation. But sometimes I like to slow down and go through a notebook. I like the concept of writing my first draft by hand, and I enjoy it in practice, but my brain makes words faster than I can write them. • I also keep a #writing journal. I like to talk about how I'm feeling and how it's affected my writing. Its nice to get it all out. • Listen, I'm late to the party but at least #authorlifemonth Day 2 is posted! Day 3 will prob be up later 😂