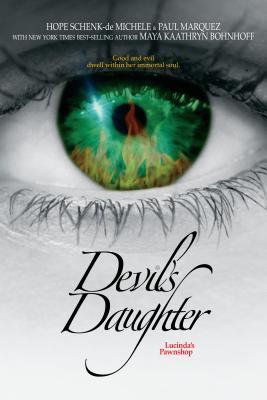 I picked up Devil’s Daughter: Lucinda’s Pawnshop by Hope Schenk-de Michele, Paul Marquez with Maya Kaathryn Bohnhoff from NetGalley earlier in the year and finished it back in August. It took me quite a long time to power through this one. There were many times when I wanted to just call it a DNF and go onto another book. But I was intrigued and curious enough to overpower my boredom.

Lucinda is as old as humanity itself, yet perpetually young, beautiful, and endowed with supernatural powers. She lives a double life human and immortal.

In her human guise, she manages Lucinda’s Pawnshop & Antiquary, the doors of which can open to any street anywhere in the world at any time. Mortals who have arrived at a moral or spiritual crossroads are drawn into the mysterious shop. If they acquire one of its cursed artifacts, they may find themselves drafted into Lucifer s service.

Born out of a betrayal of trust between the first woman, Eve, and father Lucifer, Lucinda has worked covertly and subtly for millennia to be true to her mothers love by subverting her fathers schemes. She wins freedom for some; Lucifer keeps those who fail for eternity. She has to be careful, for Lucifer has placed her under the watchful eye of the fallen angel Nathaniel, whose real intentions are a mystery.

Lucifer manipulates his army of corrupted souls to achieve his end game: to explode the tension between global powers, then create a charismatic anti-Christ to seemingly save the world with Lucinda as mother and a hand-picked human as father.

But Lucinda has her own plans. After centuries of seeming distance from humanity, she falls in love with a mortal man, which threatens to derail Lucifer’s plans to trigger Armageddon. This book follows Lucinda s torturous relationship with her supernatural father, as she strives to secretly undermine his crusade to destroy mankind.

How deep does Lucinda’s humanity go? Where do her true loyalties lie? Is she her father’s ally, or her mothers child? And if the Devil’s daughter will not love a man he can control, can Lucifer control the man she loves?

Maybe it’s the fact that I was anticipating a young adult book and received instead an adult urban fantasy, which is my fault for not reading the NetGalley entry well enough.

Devil’s Daughter is about Lucinda, the daughter of Lucifer and Eve. She’s thousands of years old, and works under her father at their pawnshop, filled with mystical objects meant to turn humans to the devil’s subjugation. Lucinda works covertly to undermine her father’s plan for overtaking the human race.

Unfortunately, that wasn’t clear during my reading. I wasn’t quite sure exactly what it was that Lucinda was doing to take Lucifer’s plans down. Lucifer, meanwhile, was trying to set his daughter up with one of his minions, a fallen angel, but Lucinda instead fell in love with a human man.

There were so many point of views that it was difficult to keep track of. The first chapter isn’t even told from the main character’s perspective, it’s from some supporting character.

I can’t pinpoint the climax of the story or where the rising action was, or should be. It didn’t feel like there was much of a story to follow.

The characters, though, were a redeeming factor and the reason I kept reading. They were multifaceted and interesting, though I wasn’t all that interested in their love lives. It wasn’t enough to keep me invested in the story in the long run.

If supernatural contemporary fiction is right down your alley, I recommend Devil’s Daughter. It is part of a series, so take some time to look into it. As for me, it gets a solid three stars and no second glance.